Dr. Philip Smith is a professor of medicine at the Johns Hopkins University School of Medicine. His areas of clinical expertise include pulmonary disease and critical care medicine.

Dr. Smith earned his M.D. from the Tulane University School of Medicine. He completed his residency at Johns Hopkins Bayview Medical Center and performed a fellowship in pulmonary medicine at Johns Hopkins.

His research interests include HIV and HAART effects on sleep and daytime function; sleep apnea and metabolic function; and obesity and neural control in sleep-disordered breathing.

Dr. Smith was recognized by the Department of Medicine with a Levine Excellence in Mentoring Award in 2005. 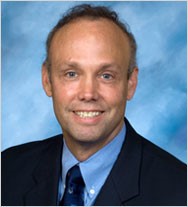 In his free time, Brian enjoys golf, coin collecting, and traveling with his wife Wendy, and son, Justin.

Dr. Steven Scharf received his Bachelor’s Degree in Biology from the University of Rochester and both his MD and PhD from Johns Hopkins University. He subsequently completed both residency (Internal Medicine) and fellowship (Pulmonary Medicine) at the Brigham and Women’s Hospital in Boston. Upon completion of his training, Dr. Scharf joined the faculty at Harvard Medical School.

Dr. Scharf has co-authored 188 articles in peer-reviewed journals, over 40 text book chapters, and over 165 abstracts presented at Scientific Meetings. He has served on the editorial board for the Journal of Critical Care and Sleep and Breathing. Dr. Scharf also served as a reviewer for 20 different journals. He served on 3 different steering committees for the NIH and on the Asthma Clinical Research Network of the American Lung Association. He has also mentored or supervised over 30 MDs and PhDs on research projects.

Dr. Scharf has dedicated over 15 years of work to developing the University of Maryland Sleep Center. He created a multidisciplinary sleep center integrating clinicians with expertise in pulmonary medicine, neurology, psychiatry, psychology, pediatric pulmonology, otolaryngology, and dental sleep medicine. He established an ACGME-accredited sleep fellowship and has educated and mentored over 15 board-certified sleep physicians. He has been recognized as one of Baltimore’s “Top Docs” in sleep medicine 3 times in the last 7 years.

Steve is a dedicated husband, father, and grandfather. His son Matthew is a practicing sleep neurologist. He has shortened his work week to be able to travel to New York and spend weekends with his children and grandchildren. He is fluent in Hebrew, and regularly travels to Israel, where he continues to teach sleep medicine at Ben Gurion University as a visiting professor.

John H. Mathias II has been a strategic leader in the field of sleep medicine for more than twenty years. John’s name is synonymous with Sleep Services of America, Inc. (SSA), and he currently serves as their President. Johns Hopkins recently merged SSA into MedBridge Healthcare for which John Mathias has also become their Chief Development Officer. John also serves on the Board of Directors for the Institutes for Behavior Resources, Inc. (IBR), a Maryland non-profit with expertise in a wide range of behavior services including fatigue risk and drug rehabilitation.

John Mathias received his Bachelor’s Degree in Respiratory Therapy, became an RRT, and worked for various respiratory care service companies including Primedica and Symphony Respiratory Services. He joined National Sleep Technologies in 1998 and has been dedicated full time to sleep technical services ever since.

In the mid 1990’s, John focused on quality review and regulatory compliance, and founded the National Sleep Alliance to promote these standards nationally. He served on several Joint Commission committees where he assisted in the development of their accreditation standards in sleep. SSA achieved one of the Joint Commission’s first ambulatory accreditations specific for sleep in 2000. John helped established the first Mid-Atlantic region’s CAAHEP approved sleep program in partnership with the Community College of Baltimore at Essex.

John founded and chaired the Maryland Sleep Consortium which focused on establishing state licensure and promotion of AASM accreditation. John co-chaired a licensure committee with Dr. Marc Raphaelson which resulted in the first passed Maryland State Bill HB 957 for Polysomnography in 2006, as well as the extension in 2009. His leadership opened a pipeline of new opportunities in sleep, DME and related entities.

As an industry leader, he has headed one of the largest providers of diagnostic and treatment services for sleep disorders and earned national recognition with the Frost and Sullivan Innovation Award, the first for a sleep medicine company.

His vision and initiative has helped develop and implement innovative and unique programs which bring high quality sleep medicine services to patients. From inpatient, outpatient and home diagnosis to a whole range of treatments, John brings expertise to hospitals, academic centers and rural healthcare settings. John’s energy and comprehensive knowledge of the ever-changing sleep landscape has made a decisive impact in the State of Maryland.

John was a founding member of the Maryland Sleep Society and currently is a member of the NSF Government Affairs Committee and AAST Best Practice for Sleep Disordered Breathing Work Group.

John strongly believes that Maryland’s sleep technologists, respiratory therapists and boarded sleep physicians roles throughout the diagnosis and treatment of sleep disorders will only grow and develop with the dynamic changes in healthcare. Their impact on reduced exacerbation of other serious chronic health conditions and the ability to significantly lower overall healthcare cost of care will ensure a bright and expanding future. 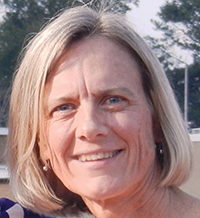 Nancy A. Collop, MD, was the 2011-12 President of the American Academy of Sleep Medicine (AASM), and is the Director of the Emory Sleep Center in Atlanta, Georgia. She holds a primary appointment in the Emory School of Medicine as Professor of Medicine in the Division of Pulmonary, Allergy and Critical Care Medicine, as well as a secondary appointment as Professor of Neurology.

At Emory, Dr. Collop is developing an interdisciplinary program in sleep medicine which involves enhancing not only the clinical care of patients with sleep disorders but research and educational endeavors needed to move the specialty of sleep medicine forward. The ultimate goal is to make the Emory Sleep Center one of the premier sleep programs in the United States.

She is currently the Editor-in-Chief of the Journal of Clinical Sleep Medicine and the Section Editor of Sleep Medicine for Up-To-Date. She was Associate Editor of the journal Chest (for 22 years) and now is on their Editorial Board.

Dr. Collop was a Founding member of the Maryland Sleep Society and our first President; she currently is on the board of directors of GASP (Georgia Associated Sleep Professionals). 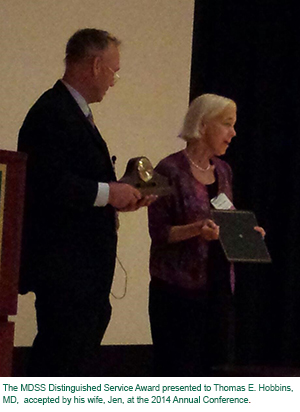 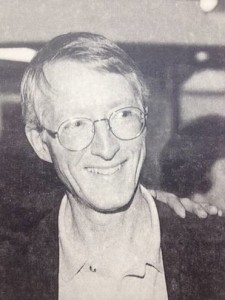 Dr. Hobbins was a physician, sleep medicine specialist, and health and human rights activist whose achievements greatly improved the care of patients with sleep disorders. His award was accepted by his wife of 31 years, Jeannette.

Highlights of his career included: 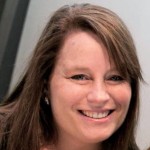 Julie Jeffers began working on behalf of Sleep over a decade ago and was involved in lobbying the first bill introduced in Maryland to require licensure for polysomnographers. She has been the Society’s lobbyist throughout the subsequent years. Over these years, legislation was enacted, “follow up” bills were introduced, adversaries became allies and obstacles became opportunities. It has been said that the legislative process is not pretty at times, and Julie guided us through its many ups and downs. What has resulted is a licensure structure that ensures quality of care and access while providing sufficient flexibility for practitioner compliance.

Ms. Jeffers is a graduate of the University of Baltimore law school and operates her own private practice. She lives in Severna Park with her husband and two daughters.